Hi Guys, I'm happy to say my new book is available for pre-order pretty much everywhere. It's already getting some nice press and, even better, seems to be touching lives with God's Love. I thought I'd offer a snippet. The following is the introduction. Hope you like it!

Peace on the Journey,
Buck 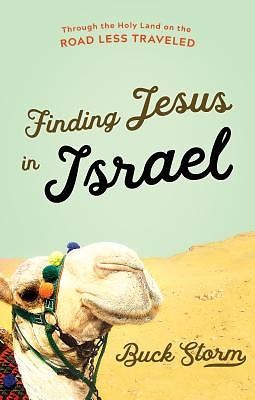 This place is a crossroads. Nowhere else does David’s harp hold down the root chords to Robert Johnson’s blues. This place wrecks you and uplifts you, breaks you and inspires you. It leaves you no wiggle room. It demands your attention.

When I was first approached with the idea of writing a book about my travels to Israel, I nodded politely, dropped it on the floor behind me, and gave it a firm kick under the rug. I didn’t mean to be rude, but while I love history, I’m no historian. I love the Bible, but I’m not a world-class theologian. I look forward to Christ’s imminent return, but I’m certainly no eschatological genius. I know several who are all of the above. I’ve worked and traveled with them. We’ve broken bread together. I respect them. But I don’t pretend to be one of them.

What I am is a songwriter. I’m a novelist with a couple of books under my belt. I’m a traveling troubadour and an observer of people. . . . I’m a storyteller. And truth be told, that’s why—when no one was watching—I pulled the idea out from under the rug, wiped the dust off it, and turned it over in my hands a few times.

You see, Israel draws me. Just when I think I’m done with the place, off I go again, winging halfway around the world. The smells, the tastes, the sights, the feel of the air. . . . It’s a land of extremes and a place of incredible dichotomy—exactly the stuff of which great stories are made. It’s the land of patriarchs and prophets. Of Jacob, Job, and Jesus. Of wars and rumors of wars. Of Jezebel’s dogs and jets kicking dust up off the Negev as they scream below sea level. It’s David and Bathsheba and legal prostitution advertised on the tart cards beneath the sturdy walking shoes of tourists rushing for buses that will take them to the Garden Tomb.

This land and its people have always played a part in my life.

I grew up with Bible stories. Sunday school in the church basement offered the flannelgraph kid version, but the real impact for me came during evenings listening to my grandpa pull tales from his old King James. The stories he told weren’t about pairs of cartoon giraffes and elephants or a mellow, surfer Jesus with feathered hair. No, this was darker stuff. Battles and blood and sex and fire from heaven. Angels and devils in a great wrestling match over mankind. Here were kings and strongmen. Lion killers, prostitutes, heroes, and liars. If it had been a drive-in theater, my mom would have shoved my head down behind the back seat and told me to stay there. No, my grandpa’s Bible wasn’t rated PG-13, but in his living room I heard it unfiltered. I heard about men and women flawed to the core but loved wildly by their Creator and used for His glory.

I also heard about a shifty con man named Jacob, whose name God changed to Israel.

Years later my grandpa finally made it to that land where so many of the stories he told took place. He returned with stories of his own, new friends, and five smooth stones from David’s brook.

To me, my grandpa was a giant killer.

When he passed, I was asked if there was anything of his I’d like to have. Without hesitation I asked for that old King James Bible.

A decade or so later, my wife and I were invited on a Holy Land tour. Off we went on our first trip to Israel, I with guitar in hand and neither of us really knowing what to expect. I was so grateful to be invited to walk through the settings of the very stories I’d heard and read all my life. Caesarea, Jerusalem, the Garden of Gethsemane, the Sea of Galilee—these places impacted me deeply. I could have left Israel satisfied and gone back to my own journey, my own tales.

But then I had a moment.

It was a very cold and wet afternoon in the Golan Heights. A soldier stood beneath the darkening sky talking to our group about an October night in 1973. It was Yom Kippur—for Jews, the holiest day of the year—and Israel was under attack. They faced overwhelming odds, an Arab coalition led by Syria to the north and Egypt to the south. The word went out for all hands on deck, and our soldier was called out of bed to fight. I listened that day in the Golan as he spoke with deep emotion of friends and brothers who gave their lives in the hills above to protect the land of both their ancestors and their children.

As his story pulled me in deeper, the sky thundered and began to rain. All around me, people grumbled, broke away from the group, and headed back to the dry warmth of the bus. The soldier still talked, but only a couple of us remained. I saw tears in his eyes. And somehow, in that moment, I knew without a doubt I would return to this place.

It hit me hard: the story of Israel—the real story—isn’t found in books. And not even in the comfortable baritone of my grandfather’s voice. Israel’s real story is written in the hearts and lives of her people. It is the unspoken tale behind a tired soldier’s eyes. It tells of a journey that grinds on—haunted, hard, and beautiful. Here was Israel. Here was Love.

Israel is beautiful. Israel is vibrant. But Israel isn’t clean. Far from it. Israel is sin, redemption, passion, and blood. At its heart, it’s human and filled to the brim with the world—people of every religious, social, and political bent. The very ones God loved so much that He sent His son to die for. Israel is a Palestinian kid on a roof in the old city beneath stars that dance like angels. It’s the Jewish vendor in The Shuk—Jerusalem’s huge outdoor market—cigarette dangling from the corner of his mouth, yelling and haggling with a housewife over the price of a fish. The guy in front of a desert gas station flirting with the female tourists and hawking rides on his sleepy-eyed camel. Pilgrims soaked in vibrating ecstasy as, on Easter morning, they march the Via Dolorosa, the path Jesus walked on His way to the cross.

At its very foundation, Israel is the story of God’s interaction with mankind.

Me? I’m a self-admitted lousy tourist. The “back on the bus please exit through the gift shop” stuff definitely isn’t my thing. So a few years ago my wife, Michelle, and I decided to start taking a few friends at a time, rent a van, and see Israel off the well-worn tourist trails. In the pages ahead, I don’t promise facts and figures. I won’t even swear to absolute accuracy. But you will see an amazing place, meet incredible people, and experience a living, ongoing story told to the best of my recollection, from the perspective of me—my grandpa’s grandson.

Through the Holy Land on the Road Less Traveled